Last week, I noticed turmeric for the first time in the vege section of my local organic supermarket. Actually, in France, it’s called curcuma but it’s the same thing. I’ve heard about turmeric but I’d never seen it in its raw form like this. I just had to buy some and see what it was like. 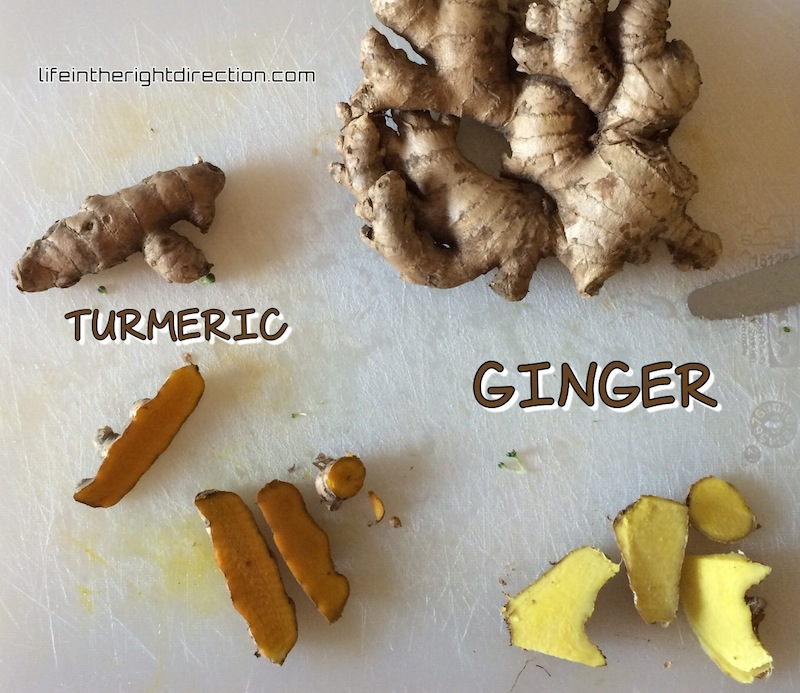 Turmeric is a popular ingredient in Indian curries. Normally it is dried, baked and then crushed into a powder and that’s what I thought it was, a very dark yellow to orange colored powder.

This was the first time I’d seen turmeric in its raw state. It comes from the same family as ginger and it’s a root very similar to ginger albeit a bit smaller, in general, and a very different color.

Luckily, turmeric can be eaten raw (just like ginger can) and the taste is interesting. I’d heard that the taste could be very powerful, but I found it to be fine when I sliced off a piece of raw turmeric and ate it. The color is very intense and quickly started to stain the chopping board. It certainly is a unique substance. This is really very easy. I just sliced the turmeric into fine, thin pieces and threw it in the blender with the rest of the ingredients. This is exactly what I do with ginger as well. If you listen to my podcast on how I make my raw green smoothies – My Daily, Raw, Green Smoothie – then really all I’ve done now is add some raw turmeric. I can notice a small change to the taste with the turmeric, but not too much.

Why bother eating turmeric? Well, even before finding out about its purported health benefits, there were a few characteristics about it that interested me;

When I search around for general information about turmeric (see some of the links below if you’re interested) it seems like the potential health benefits are almost endless. Some of the claimed benefits include; One of the natural active ingredients of turmeric is curcumin. You’ll see curcumin all over the place in supplements. There’s some discussion about how the body cannot fully access the curcumin when we eat natural turmeric and it’s better to take curcumin as an extracted supplement. I’m always suspicious of such arguments and, in general, I’d prefer to eat the real living plant any day.

If turmeric has a large range of potential benefits, then I’d guess these are not all just due to curcumin. There must be a whole range of micro-nutrients that come along for the ride that are also important. Turmeric is said to be a good source of manganese, iron, fiber, vitamin B6, potassium and vitamin C.

We hear a lot about superfoods these days, but they are all just things that grow in nature. There’s nothing that special about them. Ginger, turmeric, spirulina, cacao beans, goji berries, blueberries, etc., the list goes on. They are all things that can just be grown. They are really just how foods should be and can only be considered “super” in comparison to the poor, GMO, pesticide laden, heavily processed products that we call food these days. Just by replacing these extremely poor excuses for food by simple, natural, living foods, we’re tipping the health balance enormously in our favor.

Have I got anything wrong here? Do you have anything to add? Please leave a comment and let me know. Thanks.