This is a parable that is very familiar to me from my childhood. Growing up as a Catholic, I can’t remember how many times I’ve read or heard this parable and I never really understood it. I couldn’t understand why God would care if people made profits on their money or not. To understand what I mean, here’s the complete parable in case you’re not familiar with it.

The parable of the talents My new views on the meaning behind this parable

These days I have a number of new views on life in general and I see the messages behind this parable much differently than I have in the past. Now I see the parable suggesting that God (or if you like, the Universe, Nature, the universal being, etc.) has given every one of us certain talents in the real sense of the word. In the parable a “talent” was a unit of currency, but now I think we can consider these as real “talents” – things that we can do well and use to contribute to the world. We’ve all been given talents, things we can do well, things that can help make the world a better place. Some of us have been given a lot of talents and some of us fewer (in the parable some were given five, some two and some one), but we’re all expected to use the talents we’ve been given and get the most out of them. Whatever talents we have, we’re expected to get them into use and to develop them. Make them even better.

If we develop our talents and make the most of them and build on them, all for the benefit of the world, then we’ll be achieving what is expected from us. In the parable, this made the master happy and caused him to share his joy with us. Notice that exactly the same reward was given to the person with five talents and the person with two talents. What mattered was that each person worked on developing their talents. They worked on progressing themselves.

However, if we’re afraid and don’t develop our talents, hide them away and don’t allow them to benefit the world, the master will be very mad. He’ll see us as lazy and useless, take the talent away from us and give it to somebody who will develop it and then just disregard us and throw us out like trash. So, the parable of the talents gives me a number of new perspectives on life. It’s pretty clear to me now that this parable is telling us that everybody has some talents that they are meant to develop and use for the good of the world. Some people may be more talented than others, but everyone (everyone!!) has talents. We cannot disregard anybody in the whole world as they have been put here with talents to develop and utilize for the good of the world.

The parable also shows that we clearly have free will. After giving us the talents the master “went away” for some time. We can choose what we do with these talents but we have to answer to the master when he comes back. It’s easy to equate this to being born with talents but also free will. The master doesn’t intervene during our lives. We have the free will to decide what we will do during our life. But, at the end of our lives on Earth, we have to answer to the master about our actions and especially how we developed the talents that we were given.

People often talk about “finding themselves” and often other people make fun of such a notion. If we haven’t already done so, we must find what talents we have and start developing them.

Everyone has that fundamental knowledge of what their talents are, but often people cover that up with self-loathing and feelings of not being worthy. This is the fear, mentioned in the parable, that the servant with one talent had.

We know that everyone has talents, even if not as significant as other peoples talents. And we also know that if we develop our talents (no matter how significant) we will receive the same reward as everyone else. 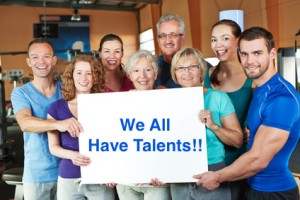 Acknowledge that we are worthy people put into this world with talents and respect that our duty is to develop these talents and use them for the good of the world. If everybody did this, I imagine the world would be a great place to be.